Note that you can download older versions of this plugin for free from here.

The build-in ParentLink feature in VaM that can link one atom to another has the problem of using the position the atom was at in the previous frame. Even at 90fps, for fast animations this can cause obvious visual lag. ParentHoldLink solves this issue, updating the atom to the correct position. This plugin is obviously based on the identically named plugin by Blazedust, but has some improvements. Most notably the link offset is stored with the scene to avoid potential misalignment when loading the scene later. Usage instructions can now be found in the plugin UI, also some minor performance improvements.​

Allows you to create cubemaps within VaM to be used for customized global illumination and ReflectionProbes. This can immensely improve shiny materials like metal, latex, leather, etc. Find a tutorial on how to use SkyMagic here, there is also a beach demo scene seen on the last screenshot.​

Take ultra-high resolution screenshots or use super-sampling to for your screenshots or recorded video. This improves image quality a LOT, especially shadows and hair, but also highres-textures. Pixel size in the comparison image has been increased by 200% to make the improvement more obvious. SuperShot (formerly SuperResolution) is the de facto standard for VaM screenshots.​
SuperShot can also help you if you repeatedly need to take screenshots from multiple perspectives, for example to show off different clothing variations. See video for details. Screenshots can also be triggered by other scripts (using VaM actions), so you can hook up external buttons, hotkeys or other helpers.​ 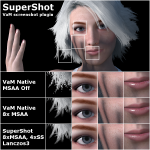 This plugin allows more fine control over VaM's VSync settings and framerate. Especially recommended when recording video or you want to reduce power usage or fan noise when working with VaM.​
AudioAttenuation

Improves how audio volume fades over distance. It should be a lot easier to get the volume right with this.​
EditMode

Let VaM automatically switch to 'Edit Mode' on scene load. Just put this on your default scene. When in 'Desktop Mode', it also opens the MainMenu and enables 'Targets' (the green atom icons).​
MSAAToggle

This was an EarlyAccess release! Download is now available for free under CC BY-SA license. You are allowed to reference this package in your own VAR packages, even if they are paid or use a different license. Links to my Patreon are always appreciated.​

Click the links below to support the other creators whose content was used to make this resource!
NoStage3
NoStage3.Hair_Long_Backswept_Pony

Power handles are the best!
I mainly use SkyMagic and SuperShot. They have become must haves for me. Thank you MacGruber!
Superb, especially SuperShot I use daily!
Great tools. Can take pictures with amazing quality with the max settings of supershot. Reshade doesnt work with it but its not a problem, i managed to tweak postmagick to get the image to my liking.
How did I manage without this. brilliant suite of plugins!
This is truly essential plugin. Thank you
I forgot to review this. Must have plugins, really really important when you dig into advanced scene creation... without this suite, you're pretty much asking for going crazy.
These awesome plugins are useful for so so many things! I especially could not make beautiful screen captures without SuperShot, thank you for sharing!
This really is essential to have, Thank you!
Essential thank you for sharing
Read more…
Top Bottom